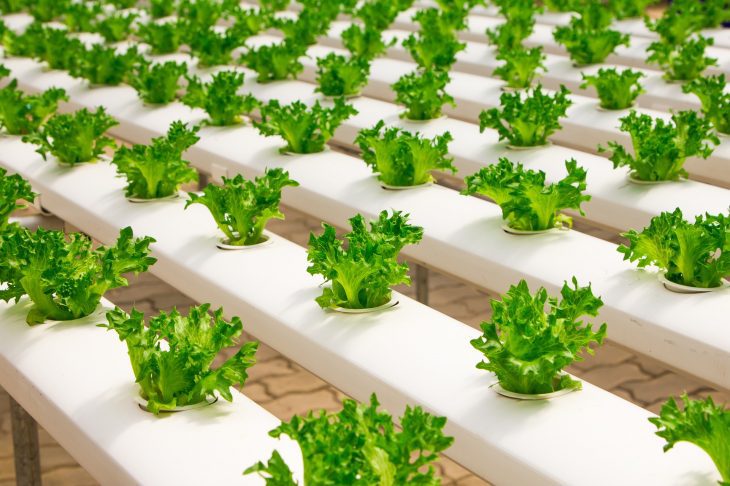 Nutrient film technique is a Continuous-flow solution culture. A very shallow stream of nutrient solution is recirculated in a thin layer past a bare root mat of plants in a watertight channel, with an upper surface exposed to air. Unlike with deep water culture hydroponics, a stream (or “film”) of nutrient solution flows over the ends of their roots.

The most common setup involves rain gutter pipes with holes to place the netcups with plants. The pipes are laid down at an angle, and nutrient solution is pumped to each pipe from a reservoir. It is recommended that slopes of 1:30 to 1:40 be used and flow rates for each gully should be 1 liter per minute. To prevent ponding in in locally depressed areas, channel length should not exceed 10–15 meters.

Developed in the 1960s by Dr. Allen Cooper, the NFT hydroponic system is mostly used for leafy greens like lettuce.

Green Automation’s shows us an automated growing system optimized for head lettuce production. The system is designed for growing head lettuces and herbs that are sold with their root ball (living lettuce) in a pot or as cut head lettuce.

If you want to build an indoor NFT system you can make a space limited one, where the the pipes are placed above the nutrient reservoir:

The CropKing NFT 4-6 is an introductory system designed to ease growers into using the nutrient film technique to grow hydroponic plants. Suitable for leafy crops such as lettuce and herbs, this systems arrives with everything you need to get started, except a reservoir.

Maintenance for a NFT system is mostly about checking the nutrient solution and cleaning algae and overgrown roots that might block the water channels.

Get cool videos about hydroponics, microgreens and DIY urban gardening right in your inbox!